That Prey is such a throwback to the cerebral first-person shooters of the late 90’s is refreshing and so infuriating in a modern context. Problems that plagued the genre in those early days that were fixed or made moot by modernization come flowing back in this loving mash up of games like Half Life, System Shock 2 and a little Deus Ex.

Prey makes no bones about its influences, which at first is refreshing, as Arkane Studios seems to be the only game developer interested in making first-person shooter flavored action role-playing games these days. But the game takes a sharp left turn when it comes to the analogies to modern takes of the genre seen in BioShock and Deus Ex: Human Revolution, in that it’s less about action or thinking your way out of scenarios and more about resource management.

Which makes Prey’s “Play Your Way” exaltation’s at the beginning of the game aggravating when you realize that it’s a sign posted in a large fenced in area that is “How The Game Expects You To Play It”. You want to run-and-gun your way through levels, like a BioShock, you can sure play that way…for a few minutes, until the bullet sponge enemies soak up all your ammo and you’re left bludgeoning them with a far less powerful wrench or dying…a lot more than you’d like to.

Knowing this to be the case before I even stated the game, I set the difficulty to “Easy”. I was going in more to enjoy the story and not have to worry about resources that much. The throwback nature of the game is such that there is no such thing as an “Easy” mode playthrough. I took the “Play Your Own Way” moniker at face value and attempted to play it like a shooter…then the reality of the way the designers actually wanted me to play Prey set in quickly. I was constantly scrambling for ammo and playing my own way through whatever I had on hand in the vain attempts of getting away from Typhon enemies that were chewing right through any protection and precious health I had held on to.

This was present up to the end of the game wherein I was significantly “leveled up” and had my shotgun fully upgraded and still the Typhon would giggle and shout “That tickles!” as I peppered it with round after round from my gun. 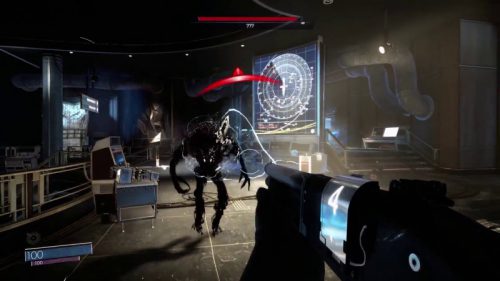 The juxtaposition is even odder considering that the game states that you can “Play Your Way” but then warns that it’s often better to avoid conflict and conserve resources for bigger, badder enemies. This would also explain the odd marketing surrounding the release of Prey where it was more action focused than the actual game on offer. It’s as if the game desires to be played slow and methodically, like a horror game, to be soaked in and not a run-and-gun Doom clone.

All of this is compounded by the notion of genre comparison to similar games like a BioShock or Deus Ex as it’s not inherently like those games yet it looks, feels and plays very much like them to its core. The game lacks the memorable characters of the former and the gameplay depth of the latter.

The one thing to note as a comparison to those in its genre brethren is the slavish devotion to the look and feel of the level design of Talos I, where the vast bulk of the game takes place. A good chunk also plays out in the outer space portions of the game, but they are mercifully short and there is little of note out there worth exploring, much to my chagrin. 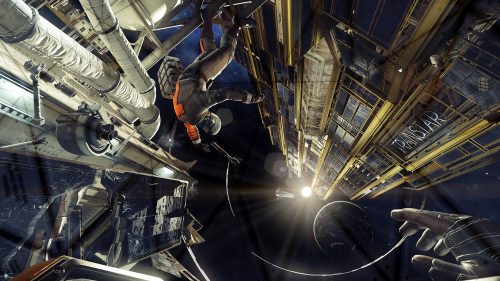 Every level of Talos I is completely unlike the other, and yet it feels like a giant space skyscraper that was built on top of an old ass 60’s era space station. Its interconnected nature is something to behold and you spend a fair amount of time in each level doing odd missions, reading emails and listening to audio logs. This is where Prey shines brightest.

Taking a page out of a game like Deus Ex and BioShock, Talos I feels lived in and real. Everyone you come across has a name, and more often than not, a little back-story you can uncover via the emails or audio logs you come across in the surrounding areas. Some Typhon even have the names of the people that they corrupted with their alien powers, which leans in to that horror game direction that is mostly the bread-and-butter of what Prey has to offer.

What is most disappointing about Prey is that the story is ultimately boilerplate and really doesn’t do the genre its aping justice. Maybe that was the point? Instead of giving that gut punch twist towards the back end of the game, the games narrative just plays out as you single-mindedly set about the task of getting off Talos I…all of three or four different ways, sadly.

The “twist” of an ending is such that you’re essentially judged for the few major actions you took during the game. Whom did you spare, did you take on any Typhon powers, and how you handled certain scenarios are played out and put under a microscope. I personally enjoy this type of trope, it was also done masterfully in the first season of Telltale’s Walking Dead where a character litigates the big decisions you make throughout the game. It’s nice to see what the designers thought of the way you played through their game, limited as it may seem.

The disjointed nature of the narrative is mostly based on your characters experimentation with alien technology laden amnesia, but it also attempts to hide the more lacking elements of the story and how it leaves a lot of dangling threads that never completely resolve. I can’t tell if it was just a lack of development time or toying with the players anticipation of the “big twist”, but it is a problem that plagued Arkane Studios other recent release Dishonored 2.

Prey is very much the definition of a game that isn’t for everyone. I can’t imagine many modern gamers going in to it expecting a shooter to be satisfied by what is on offer. The combat is purposefully anemic and frustrating, there are no “bosses” per se and the narrative alone isn’t enough to provide proper motivation to finish it to see whatever ending is on hand.

Instead, Prey is a throwback to the olden PC games of yore, warts and all. The ludicrous load times (on consoles), the stiff difficulty, the obtuse design elements and the focus being more on environment and tone rather than story will turn a lot of gamers away. Nevertheless, if you’re patient (or a glutton for punishment) and play the game the way the developers intended, Prey is a very enjoyable game.